A hat-trick from Sam Kerr, a brace from Fran Kirby and a goal from Guro Reiten gave the hosts all three points.

Blues created a few openings but endured a tough afternoon against the Champions League semi-finalists.

Carla Ward made three changes to the side that drew with Bristol City. Gemma Lawley, Mollie Green and Emma Kelly came in for Rebecca Holloway, Lucy Whipp and Jamie-Lee Napier. Heidi Logan and Emily Murphy returned to the bench after injury, whilst there was also a place in the matchday squad for Veatriki Sarri. 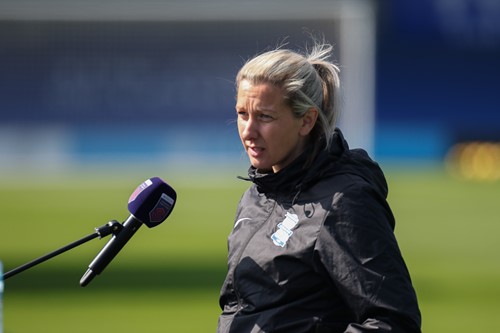 Blues started positively, cutting out Chelsea’s forward ball and frustrating the hosts. Georgia Brougham and Sarah Mayling linked-up well down the right-hand side a number of times.

Gemma Lawley used her strength to muscle Kerr off the ball and then picked up a free kick as she looked to play the ball forward.

Chelsea found the opener after 25 minutes. Erin Cuthbert’s drive from the edge of the area was parried out by Hannah Hampton, but Kerr reacted quickest to fire it in from close range.

Millie Bright misjudged a ball over the top from Christie Murray and Claudia Walker went through on goal, but her left-footed effort went just past the post.

The hosts doubled their lead on the stroke of half-time. Pernille Harder’s header came crashing back off the bar, but striker Kerr again reacted to plant a downward header into the back of the net.

Shortly after, the Australian had her hat-trick. Cuthbert whipped in a free-kick and the striker powered a header beyond Hampton. 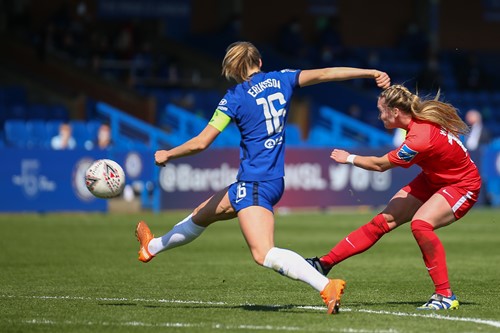 Chelsea scored a fourth as the game entered the final half an hour. Beth England cut the ball back to Kirby who guided the ball into the far corner.

Harriet Scott burst down the left and combined with Jamie-Lee Napier, the former charged into the box, but her effort was blocked inside the area.

Kirby advanced down the right, before pulling the ball back to Reiten to power beyond Hampton for the hosts’ fifth.

Chelsea added a sixth in injury time. Kirby went through on goal and found the bottom corner with a bending effort. 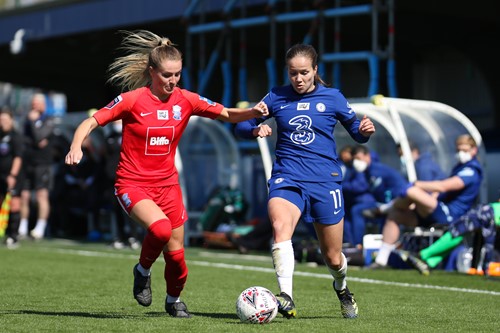