Blues Women struck in stoppage time to pick up a crucial point against West Ham United in the Barclays FA Women’s Super League.

A goal from Emily Murphy gave Blues the lead at half-time, but the Hammers came out firing in the second half and took the lead through Emily van Egmond and then Katerina Svitkova.

Carla Ward’s side continued to hunt for an equaliser and secured it in dramatic fashion. Ruby Mace found herself at the back post to volley it in with the last kick of the game.

Ward made three changes to the side that lost to Everton last time out, one of which was enforced. Harriet Scott picked up her fifth yellow card of the season against Everton so missed out and was replaced by Georgia Brougham. Mollie Green and Emma Kelly dropped to the bench in place of Lucy Whipp and Emily Murphy.

The game started frantically with both sides seeking to build attacks quickly and the first chance went the way of the hosts. Cecilie Kvamme crossed a ball in onto the head of Van Egmond, but it was a comfortable save for Hampton.

Blues took the lead with their first opportunity of the game. A well-worked corner routine found its way to Murphy, who powered the ball into the bottom corner to open her account for the Club.

Powering in her first goal for Blues! â˜„ï¸@EmilyMurphy001 🌟

Continued pressure on the West Ham backline saw the ball come the way of Ruesha Littlejohn, whose half-volley drifted inches over the bar.

Defender Mace showed fantastic skill to get herself out of danger in the closing stages of the half. Martha Thomas chased her down, but composure and a roulette from the 17-year-old saw her clear the danger.

The Hammers came out firing in the second half. Gilly Flaherty lofted a ball forward that Hannah Hampton could not claim and Van Egmond pounced to level the scores.

Blues shot-stopper Hampton was then called into action to deny Thomas. The Scottish striker ran through on goal, but the ‘keeper got down low to deny her.

Going into the final 15 minutes, Svitkova put the hosts ahead. Van Egmond was again involved, this time rolling the ball into the path of the midfielder, who fired an effort in off the post.

Blues soaked up some West Ham pressure in the closing stages and attempted to counter when they had the ball.

And it paid off with the final kick of the game. Sarah Mayling curled in a delightful cross and found Mace at the back post who volleyed into the bottom corner.

Scenes at the death! 🤩@officicalRM 😍 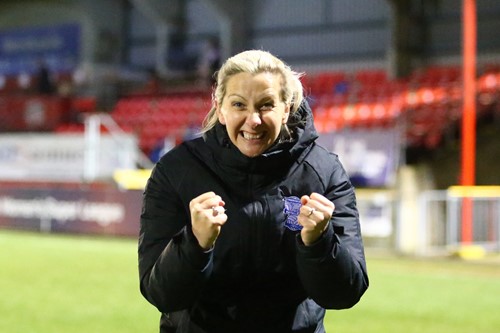