On Sunday 12 May 2002, at the Millennium Stadium in Cardiff, Birmingham City and Norwich City became the 59th and 60th different teams to contest a play-off final since the format’s induction into English football’s league system for the 1986/87 season.

For Blues, their experience had been one of unlucky dips in the end of season lottery, having lost out to Watford, Barnsley and Preston North End in consecutive campaigns between 1999 and 2001. Likewise, the Club’s previous venture to Wales’ premier sporting venue had been one of despair as they lost out on penalties in the Worthington Cup final to Liverpool.

Just 12 months later they were back in South Wales, but much had changed. Only three of the starters from the League Cup showdown were on the field at kick-off against the Canaries and Trevor Francis had been replaced in the dugout by Steve Bruce, formerly a player at both Blues and Norwich.

Millwall and Wolverhampton Wanderers, despite having home advantage in the second legs, were despatched at the semi-final checkpoint respectively and the stage was set, surrounded by a cauldron of royal blue and white and yellow and green. 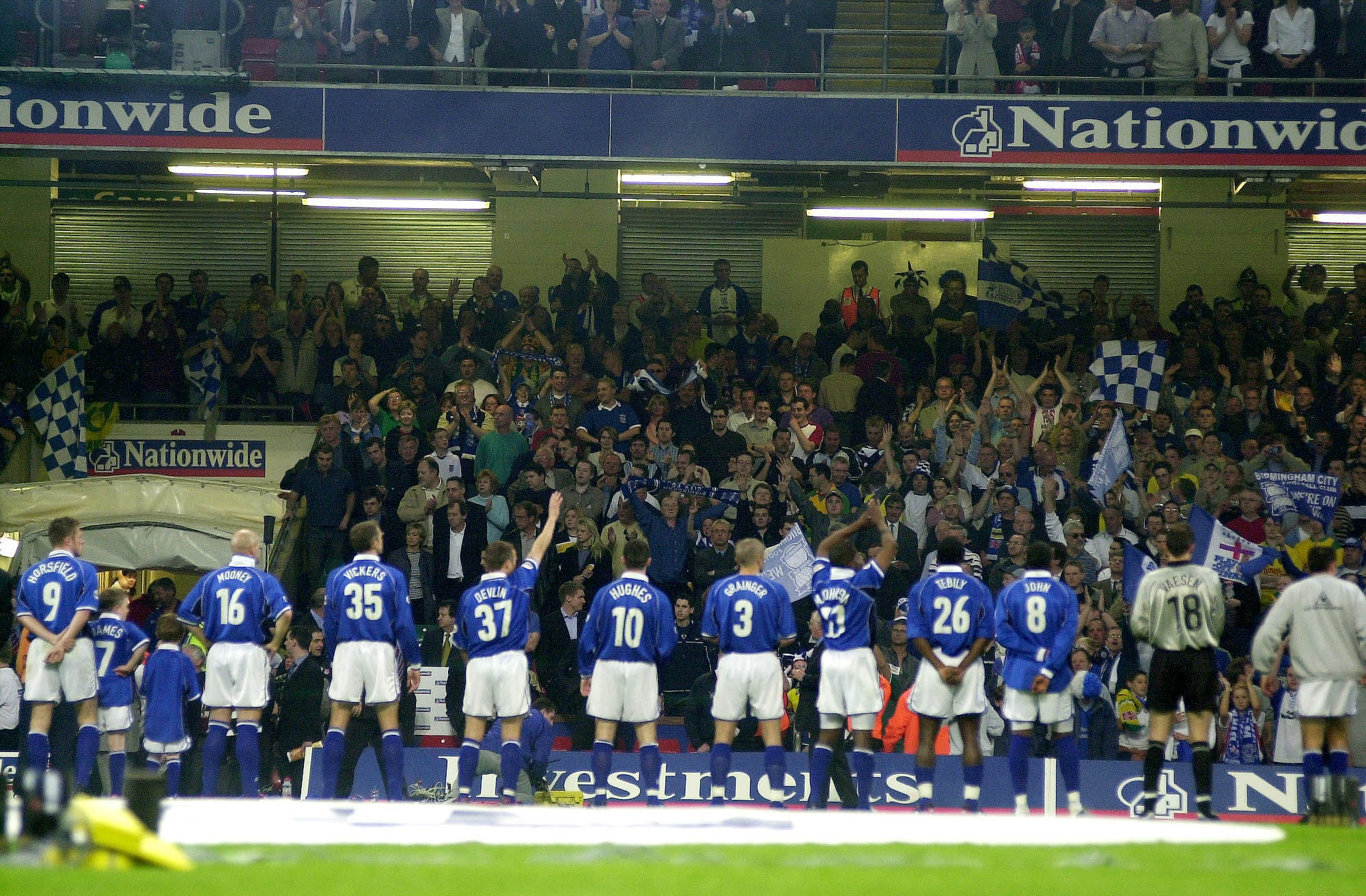 Blues' players salute the supporters ahead of kick-off.

Although neither side was able to find an early tune after Atomic Kitten’s pre-game performance and fireworks left the stadium, thanks to its closed roof, bathed in a layer of smoke meaning some players were struggling for their breath.

Martin Grainger would send the first shot in anger from a free-kick off target before the hero from The Den, Stern John, and Norwich’s Clint Easton also lacked accuracy with shots on goal. Rob Green then saved from Geoff Horsfield on the stroke of half-time and the second period became a tale of the two goalkeepers as Nico Vaesen and his counterpart sent the match towards overtime.

Skipper Jeff Kenna made certain of this when he critically got to Alex Notman's cross ahead of Iwan Roberts. However, no such intervention could be made to stop the Welshman’s next advances as he put Nigel Worthington’s side ahead just 60 seconds into the additional 30 minutes.

His planted header was equalised before half-time in extra-time as Geoff Horsfield showed pure striker’s instinct to swing the pendulum in Blues’ favour. And this momentum shift set them up for a winner, only to watch Michael Johnson’s aerial attempt rebound out off the foot of the post with penalties looming large. 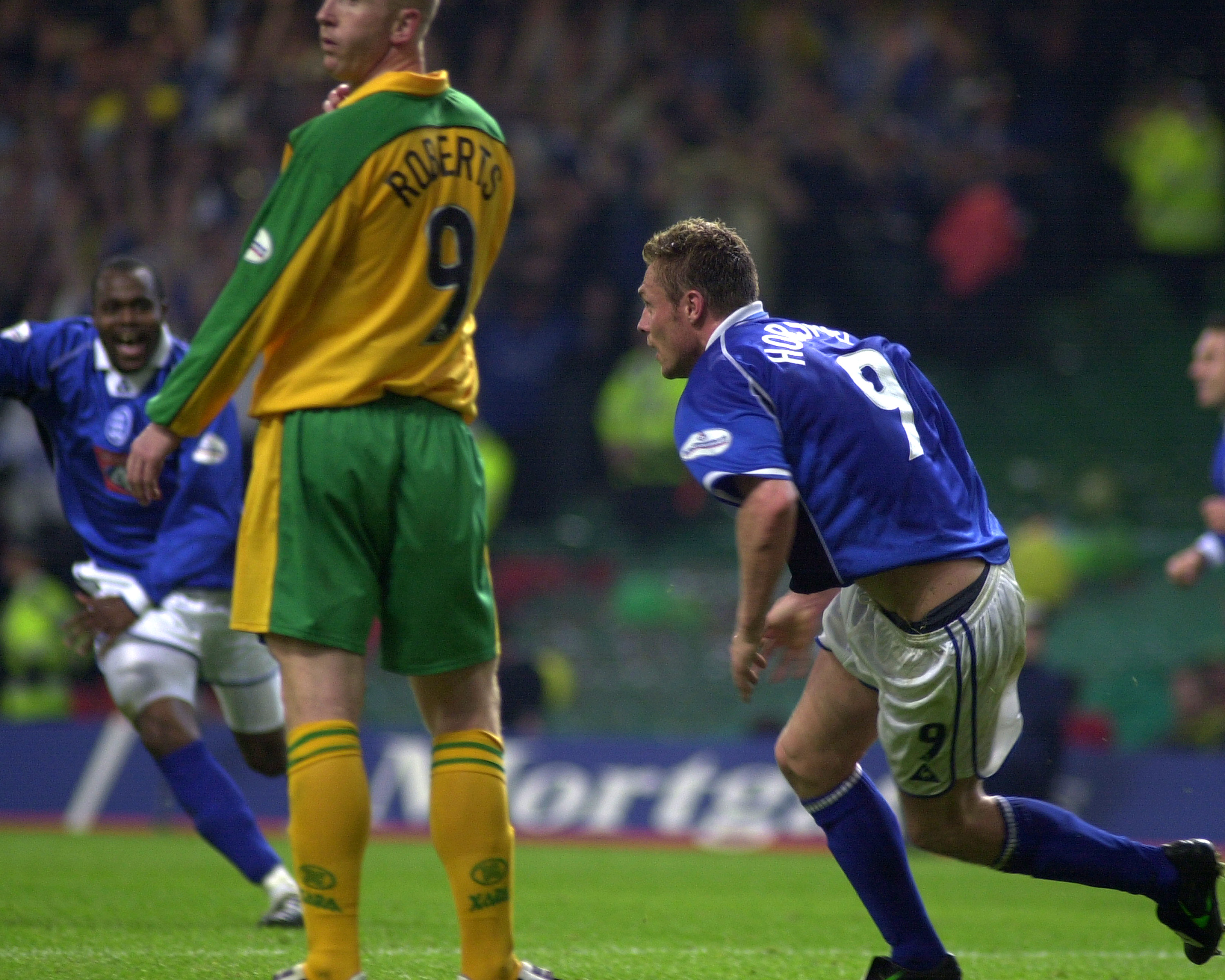 History, however, suggested that this was not a favourable determiner of victory for the team from the Second City. Not only had they lost out to Liverpool in the cruellest fashion when Andy Johnson had his decisive penalty saved, but play-off semi-final shootouts versus Watford and Preston only served to increase the anguish upon Graham Barber’s final whistle.

These spot kicks would be taken in front of the travelling Bluenoses, who made up 50% of the 71,597 attendance, and whose cries of Keep Right On could frequently be heard above anything else in Cardiff until a hush lowered over the stadium’s bowl.

Frontmen Roberts and John would open the shootout successfully before Philip Mulryne, who had failed from 12 yards against Gillingham in the March, was foiled by Vaesen’s strong hand as Paul Devlin went on to purposefully cement the advantage. 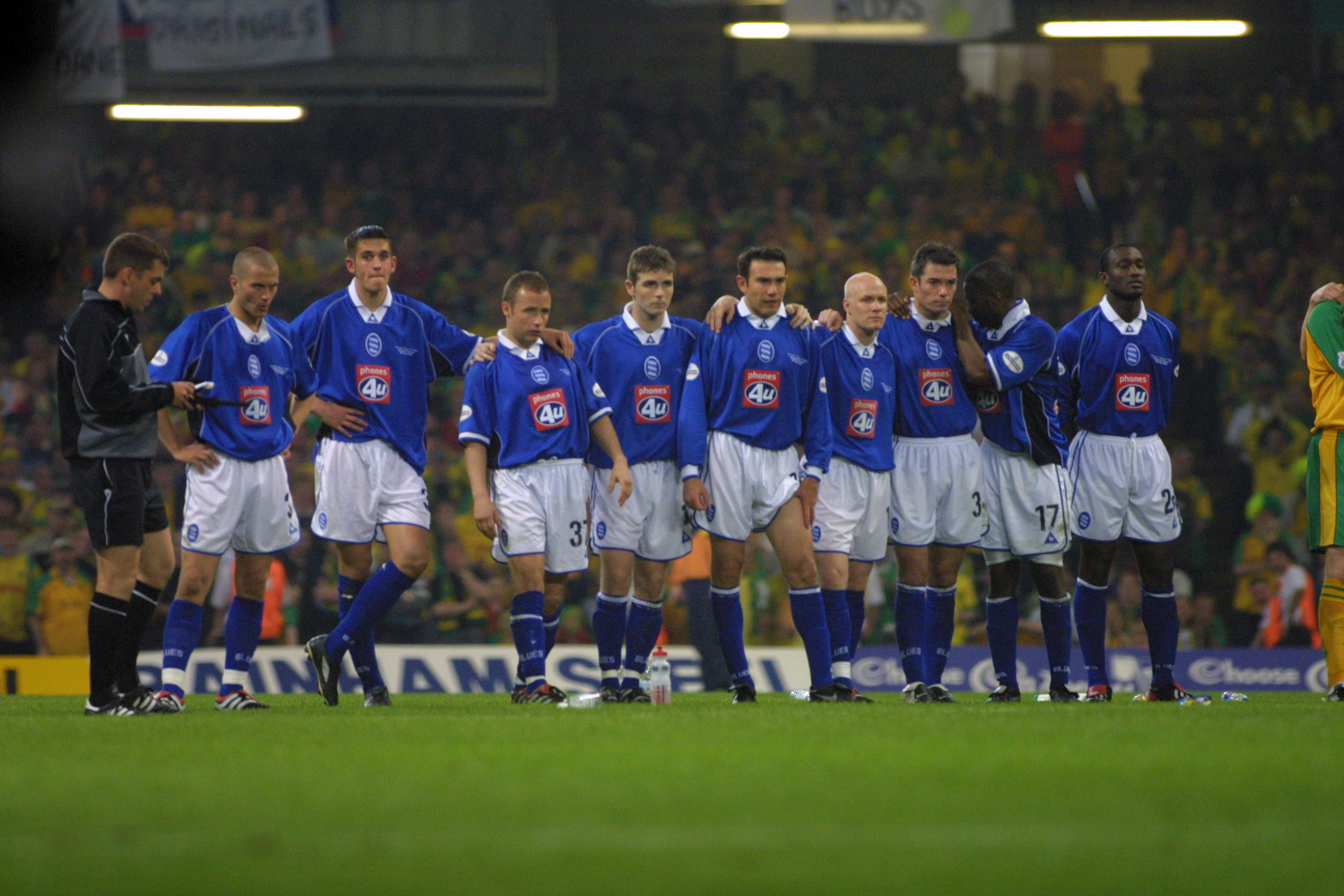 The Blues team stand united during the penalty shootout.

The proud Brummie had only returned to the Club on a permanent basis from Sheffield United just three days before the final and was a picture of relief as he swapped places on centre stage with Daryl Sutch. Norwich’s stalwart defender rolled his penalty wide and in the words of television commentator Peter Drury, it was “fading away for Norwich.”

Stan Lazaridis confidently put Blues on the brink when he sent Green the wrong way, although Easton kept Bruce’s men waiting when he squeezed one in, leaving 18-year-old Darren Carter with the prized kick.

Still in the second year of his scholarship, the England Under-19 international had only debuted in the January but was calmness personified as he stood over a penalty worth £40 million to the Club and an infinite amount to the boyhood Bluenose. 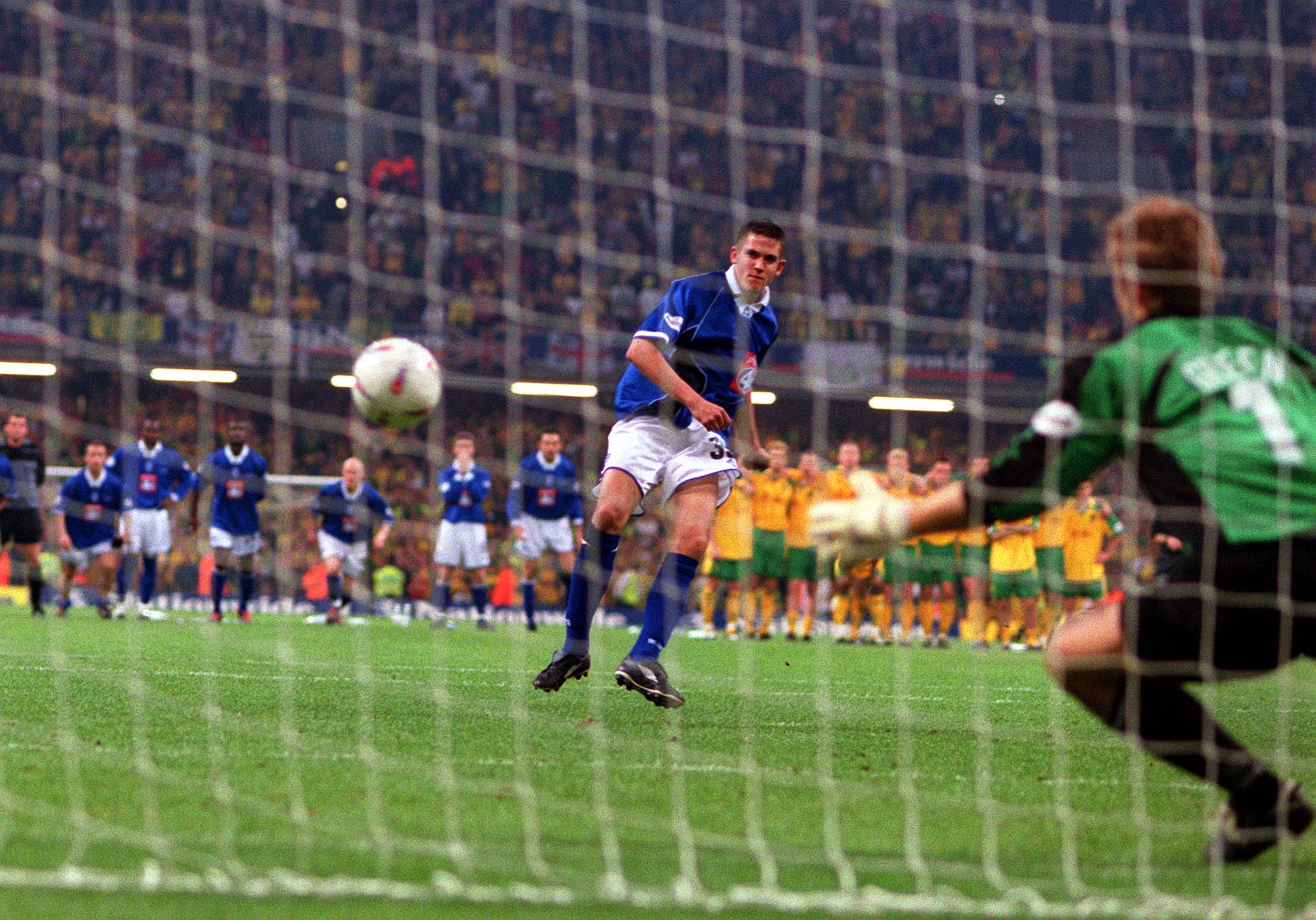 Darren Carter scores the promotion-winning penalty at the Millennium Stadium.

Eight short steps and one swing of his left boot later, Carter immortalised himself in play-off history and ended Blues’ 16-year absence from the top flight to spark an outpouring of emotion from players and supporters alike ahead of the trophy lift.

This was hoisted in tandem by Kenna and the man Carter had replaced after 71 minutes, Steve Vickers. And as a precipitation of ticker tape and confetti drizzled onto the buoyant players and rocking all over the world filled the air, it started to sink in that Birmingham City were in the Premiership, the Premiership. 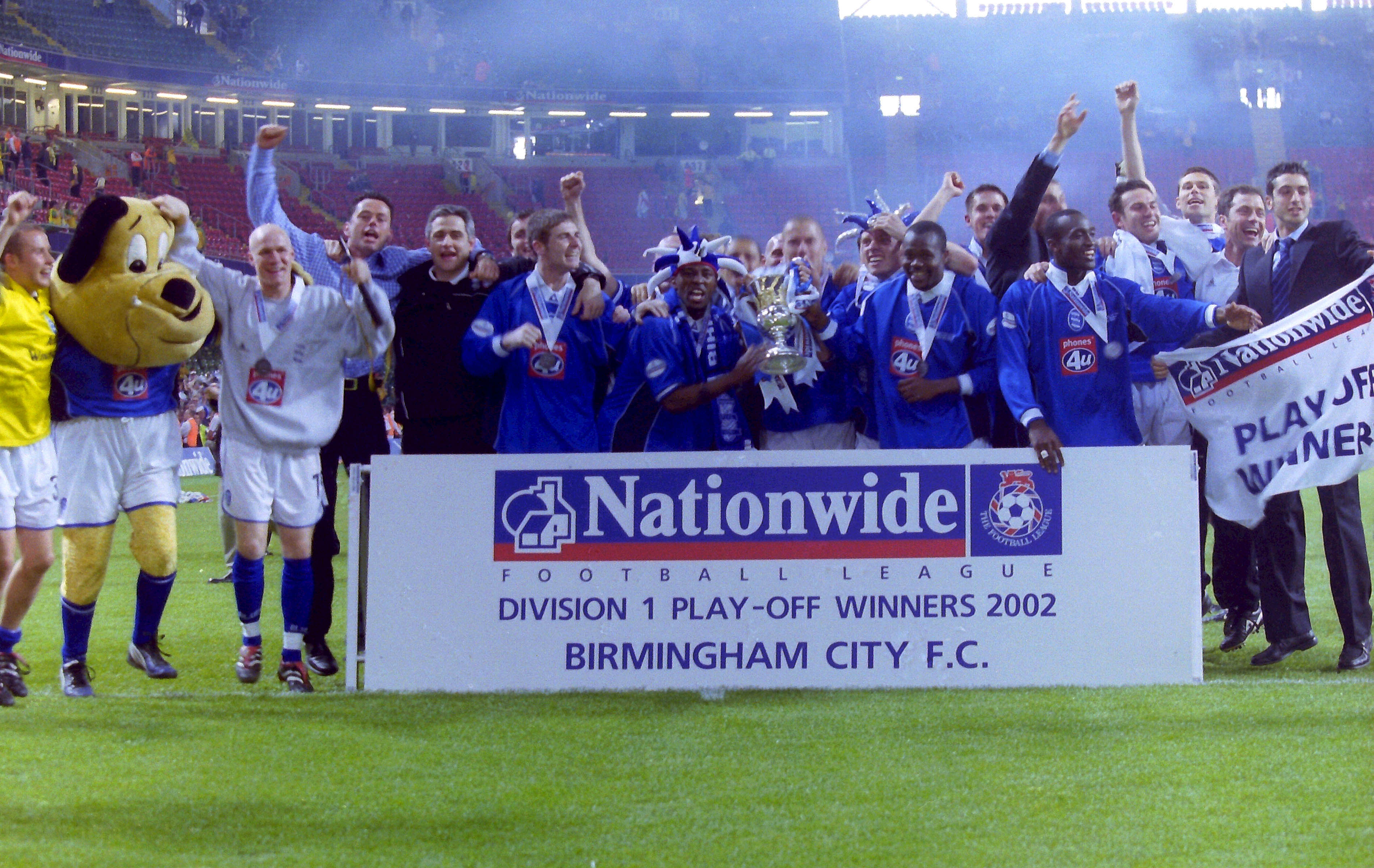 Blues players celebrate reaching the Premiership for the first time.