We would like to try and get some momentum going, you never know who you can draw in the FA Cup.

Blues begin their 2017/18 FA Cup campaign with a third round tie against fellow Championship side Burton Albion at St. Andrew's on Saturday (3.00pm kick-off).

Steve Cotterill on his side going into the cup game having picked up back to back wins in the league...
"I don't know if it's been a weight off getting back to back wins. I think it's been more about the points tally. It was just important to try and build on the good result because whenever we've had a good result in the past we haven't had another one to back it up. So, where were the players confidence-wise when they won a game? Were they thinking they were lucky to win that game, because they’ve only been by narrow scorelines? So, to back it up with another win was really important for us and for them as well. It was nice coming home on the bus the other night that's for sure."

The Blues boss on how the mood has been amongst the squad this week...
"Anybody that tells you they don't look at the table is probably telling you a white lie. We're all realistic so there's no point in me saying to you 'The performance is good, but I haven't looked at a league table.' People would think you're mad. I think everybody looks at the league table, we all do that. The mood hasn't really been any different, but I think they're getting stronger friends with each other. Winning helps that."

Cotterill on coming up against opponents from the same division...
"I'd rather have not have played a team in our league. It wouldn't have mattered what league, but I don't really like it if you're drawn against teams in your own league in the FA Cup. But I'll be pleased to see Nigel (Clough) because Nigel is a good friend of mine and I get on very well with him. He texted me as soon as we had the draw and said, 'At least you're at home!' so we had a bit of a smile about that. I suppose there is a little bit of pressure off us because we're both at the wrong end of the table. But he's done a marvellous job there. The first time round was fantastic and the second time around equally as good and he'll go down in folklore there for what he's done for Burton Albion. They're a great club as well; the chairman is a top guy and I'm really pleased for them. I have some great friends at Burton Albion but looking at us I want us to win."

Cotterill on looking for his team to keep their momentum going....
"We would like to try and get some momentum going, you never know who you can draw in the FA Cup. We will look to try and win this game, as Nigel will I don't doubt for Burton. They have been a bit of a bogey team to us but at the end of the day we are both going to kick off at three o'clock on Saturday with a view to want to get into the next round."

Blues team news
Steve Cotterill has indicated that he doesn't expect to make wholesale changes for Saturday's cup tie. Isaac Vassell (knee) and Tomasz Kuszczak (groin) remain out. Che Adams came on as a late substitute for Blues against Reading on Tuesday following his recovery from a hamstring injury, but is likely to be on the substitutes' bench again.

Burton team news
Record signing Liam Boyce (knee) is the only player definitely missing because of injury for the Brewers.

Key Stats
- Blues and Burton have met just three times previously, with the Brewers winning all of the Championship fixtures.
- Former Blues loanee Lloyd Dyer has scored in each of those three meetings.
- Blues have reached the FA Cup final twice in the Club's history - in 1931 and 1956.
- Burton have never gone further than the fourth round in the FA Cup.

Listen live
BluesTV subscribers will be able to listen to live commentary of the game from St. Andrew's. Due to broadcasting restrictions, the Club is unable to broadcast this game live.

Match officials
Jeremy Simpson will take charge of Saturday's game at St. Andrew's. The Lancashire-based official has refereed 24 games so far this season, where he has produced a total of 101 yellow cards and five reds. The last Blues game he refereed was our Championship away fixture at Sheffield United in November 2017. That match ended in a 1-1 draw and there were a total of five players cautioned; including Cheikh Ndoye, Jonathan Grounds, Maikel Kieftenbeld and Jota for Blues. The last Brewers game he took charge of was their 1-1 Championship away draw at Barnsley in April 2017. Three players received a yellow card in that game; including Tom Flanagan and Luke Varney for Burton. Mr Simpson will be assisted on Saturday by Adam Crysell and John Flynn. 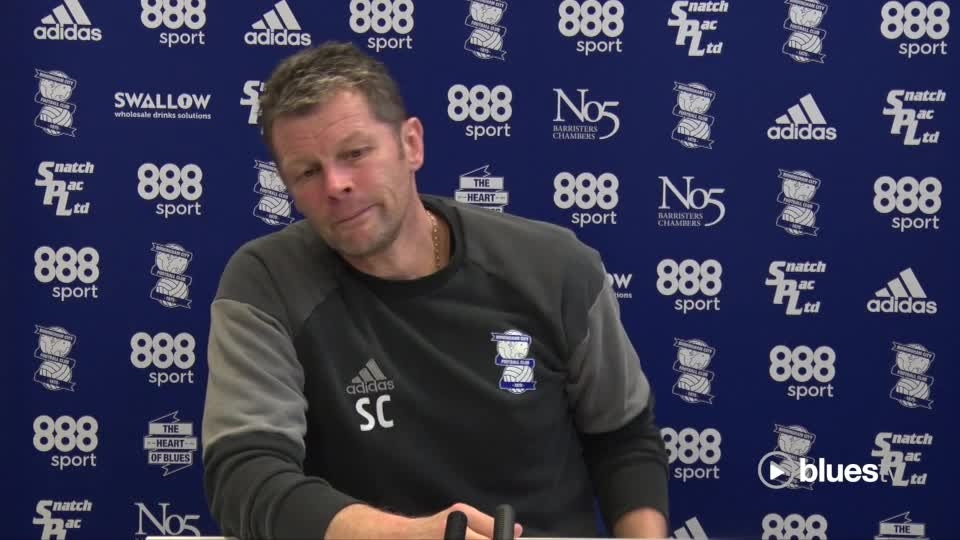