Flashback: Blues over the moon

Trevor Francis’ side claimed a dramatic victory at Maine Road.

With Blues 2021 FA Cup campaign beginning at Manchester City this Sunday, enjoy looking back at the Club’s most recent win away to the Citizens.

This weekend’s meeting between the two teams is the first since 2011 and you have to go back a further 13 years to find the last Blues victory on the blue side of Manchester.

It proved to be a ‘lucky’ April 13 in 1998 as Trevor Francis’ side claimed a dramatic victory at Maine Road. This came exactly four months on from winning the reverse fixture 2-1 at St. Andrew’s when they scored twice in injury time.

Facing off in the season’s closing stages, play-off chasing Blues were looking to complete the double over Manchester City for the first time since the 1980/81 campaign. Meanwhile, the hosts were trying to stave off relegation to the third tier for the very first time.

Despite their lowly position, it was the home team who made the majority of first-half running, forcing Ian Bennett into a sharp stop from Jamie Pollock as early as the eighth minute. A further scare followed when Gerard Wiekens rattled an effort off the underside of the bar before Blues scrambled the ball to safety.

Having survived two more close shaves, Blues returned from the interval looking much more like a team competing in the table’s upper regions. They were also reinvigorated by two changes with Darren Purse and Steve Robinson forming a double substitution at the break.

The latter tested Martyn Margetson from a Jon McCarthy corner, either side of off-target attempts from Martyn O’Connor and Peter Ndlovu, as Blues began to turn the screw.

Turning up the heat, Dele Adebola tried his luck with a speculative effort from distance and Robinson again caused panic in the host’s defence, but it seemed the deadlock would not be broken. 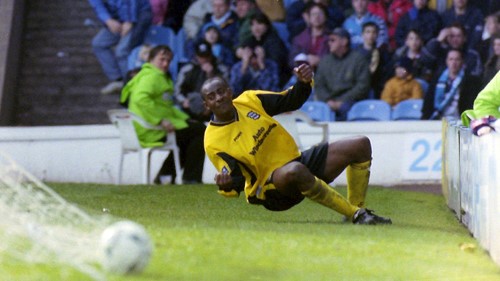 That was until the 90th minute when, as with the home fixture, Blues produced a late show as Adebola provided a moment of magic.

Receiving possession inside his own half, the frontman found the energy and then composure to score a wonderful solo goal.

First beating a series of City defenders, Adebola raced clear into the penalty box before teasing the ball beyond the on-rushing keeper to find the far corner and restore Blues’ play-off ambitions.

The team would go on to win two of their last three matches and finish seventh, level on points with Sheffield United in sixth. Blues even had a better goal difference than the team occupying the final play-off spot, but the Football League rules of the day stated that goals scored took precedence if a tiebreaker was needed and the Blades had the edge in this metric.