The defeat was only the third time this campaign that Blues have been beaten on the road.

Blues were beaten 3-2 by AFC Bournemouth in the Sky Bet Championship on Saturday afternoon.

Scott Hogan had given Blues the lead in the first-half before he completed a brace with an equaliser after Bournemouth struck either side of the interval.

But Blues left the Vitality Stadium empty-handed with substitute Philip Billing scoring in the final 15 minutes.

Karanka made two changes to the side that drew against Wycombe Wanderers on Tuesday night. One was enforced due to Marc Roberts’ suspension with George Friend coming into the defence, whilst Scott Hogan was charged with leading the line. Yan Valery was amongst the substitutes after he signed on loan from Southampton during Monday’s deadline day. 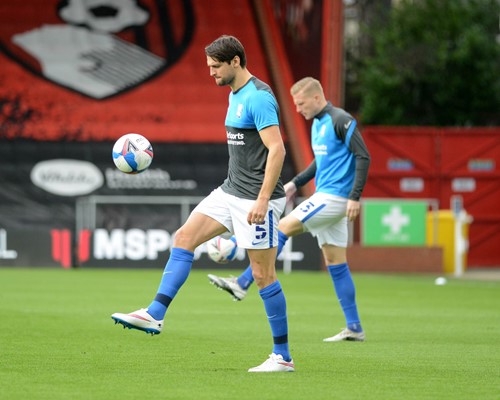 Blues coped well with Bournemouth’s front-foot start, dealing with a succession of dangerous free-kicks and then enjoying their own spell of territory in the Cherries half. This saw both Ivan Sanchez and Jeremie Bela get joy on either flank with the latter having the game’s first shot on target.

Sanchez came even closer with Blues’ next serious attempt on goal in the 18th minute when the visitors looked to capitalise on Bournemouth’s inability to clear a corner. The Spaniard saw his fierce strike headed off the line by Steve Cook before Ivan Sunjic forced Begovic down to his right in the subsequent passage of play as Blues started to turn the screw.

And this pressure bore fruit as Blues took a deserved lead with 28 minutes on the clock. Again threatening from out wide, the energy and industry of Gary Gardner created space for the Brummie to centre and Scott Hogan was the grateful beneficiary of a fumble from Begovic to thump the ball into an unguarded net. 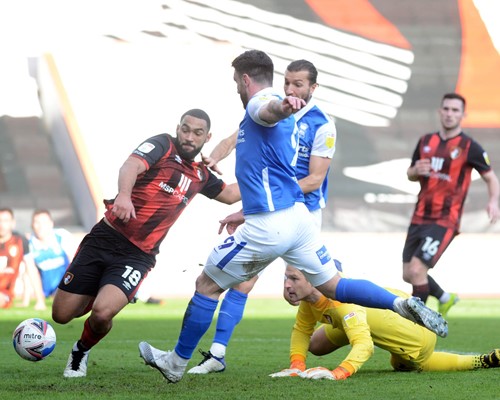 Karanka’s team had the ball in the goal again moments later, but Kristian Pedersen’s stunning volley was chalked off by a raised flag.

Clearly serving as a let-off for Jonathan Woodgate’s men, the hosts upped their game and equalised in the 36th minute. Supplied by Jack Wilshere, Arnaut Danjuma progressed into the penalty area and found the bottom corner with a curling finish.

As with the opening 45, Bournemouth looked to make a fast start and George Friend vitally got ahead of Shane Long to cut out Lloyd Kelly’s low cross with the Irish international poised to tap home.

But it was another cross just after the hour that undid the Blues defence and put the Cherries ahead for the first time. Moving from back to front, David Brooks found the overlapping Adam Smith and his flighted ball was headed in off the woodwork by Wilshere.

Tracking the path of Sanchez’s delivery, Blues’ top scorer kept himself onside and finished with the deftest of headers for his third goal of the season against Bournemouth.

Unfortunately, parity was held for less than ten minutes with Billing restoring the home side’s lead. The man who had earlier replaced Wilshere ghosted in at the far post to turn home Danjuma’s powerful free-kick.

Both Yan Valery and Sam Cosgrove came on for their debuts in the closing stages, but neither were able to find a third goal as the afternoon ended in defeat on the South Coast. 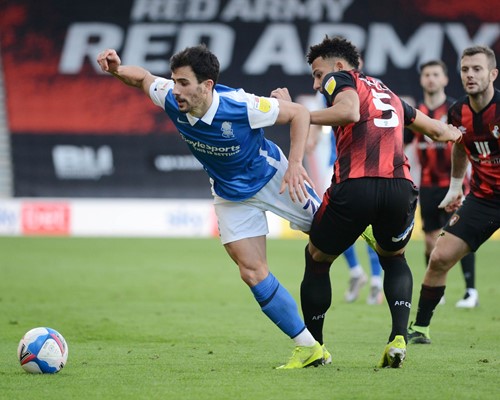 Had Pedersen’s tremendous volley stood in the opening period, Blues would have led two to the good and been riding on a wave of momentum. As it was, the goal was ruled out and Bournemouth were able to work their way back into the game.

The defeat was only the third time this campaign that Blues have been beaten on the road and the first time in 2021, having previously beaten Middlesbrough and collected a point at Wycombe Wanderers.

Blues are without a midweek fixture so will return to action when they host Luton Town at St. Andrew’s Trillion Trophy Stadium on Saturday 13 February. They then take a trip to face Millwall the following Wednesday, again in the Sky Bet Championship.