Blues came closer to scoring than Thomas Frank’s side when Gary Gardner hit the woodwork in the first-half.

Blues drew away to Brentford in the Sky Bet Championship on Tuesday night.

The point could prove vital come the final reckoning and was fully deserved on the Club’s first visit to the Brentford Community Stadium.

Facing one of the division’s finest attacking outfits, Blues defended resolutely but were grateful for the commanding and save-laden performance of Neil Etheridge.

And although being under pressure for large periods, Blues came closer to scoring than Thomas Frank’s side when Gary Gardner hit the woodwork in the first-half.

Head Coach Lee Bowyer made two changes to the side that beat Swansea City last time out. Matchwinner from Good Friday Scott Hogan was brought into the starting XI to partner Lukas Jutkiewicz, whilst there was a first start since January for Riley McGree. 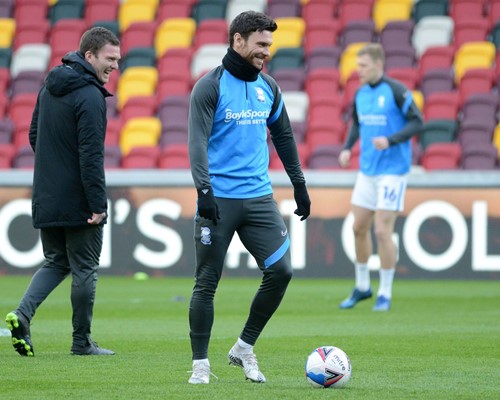 The evening’s first chance fell the way of Mathias Jensen after just eight minutes. But after Blues could not convincingly clear a Brentford Corner, the Dane could only fire high into the stand behind Etheridge’s goal.

Blues responded with their own effort, although Harlee Dean’s long-range drive was equally wayward before the visitors did go significantly closer.

Fine work from Hogan saw him size up his marker and dart beyond him to create a yard for a sight of goal. Then, instead of being selfish from the angle, he guided the ball across goal where Gary Gardner was creeping in and struck the foot of the post from close range.

Canos really should have put Brentford ahead with the game’s next major opportunity but having raced clear his delicate finish rolled wide much to his anguish.

At the other end, with half an hour on the clock, a well-worked throw-in routine between Marc Roberts and Maxime Colin presented a chance for Jutkiewicz. Blues’ number ten found space inside a crowded penalty box, but his headed attempt was miscued over the crossbar.

And as the game continued to flow between either final third, Etheridge was twice up to the task of denying the Bees. First beating away a powerful Ivan Toney effort, the ‘keeper then comfortably grabbed Jensen’s on-target shot. 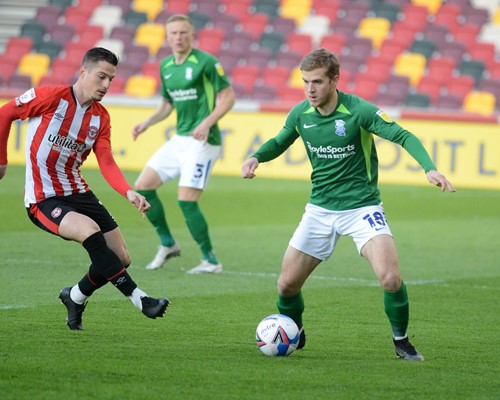 Blues’ number one carried such fine form into the second-half and was sharply off his line to smother Bryan Mbeuno seven minutes after the break.

Etheridge excelled himself again when he batted away Toney’s snapshot as the home side came out brightest.

And Brentford must have felt they would eventually have the better of the Philippines international, but even Mbeumo’s well-placed header was clawed away when a goal seemed to be inevitable.

Despite Frank’s players having greater control for much of the second 45, Blues still offered a threat on the counter-attack and nearly took the maximum late on. Benefitting from Gardner’s lung-bursting charge forward, the ball got slightly stuck under Jonathan Leko’s feet and his strike was blocked in what was the game’s final chance. 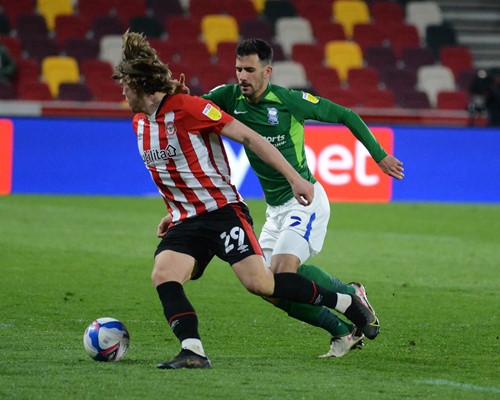 It was a valuable point in the capital but could have been more if Gardner had better fortune from an acute angle. Supplied by Hogan’s feathered centre, the midfielder’s firm connection ricocheted off the upright.

The draw means Blues have 42 points from their 40 Championship matches.

Blues return to St. Andrew’s Trillion Trophy Stadium on Saturday as they host Stoke City. This is followed by a trip to South Yorkshire where Rotherham are the opponents for a midday kick-off live on Sky Sports.