Birmingham City Football Club has a zero-tolerance policy toward any form of discrimination.

Blues are committed to identifying, confronting and eliminating discrimination towards any group or individual based on a protected characteristic.

The protected characteristics are:

We recognise our role in the community, being conscious to represent and welcome everybody that shares our values of equality and diversity to our sites and to engage in our activities in a safe and inclusive environment.

We are absolute in our ambition to making football accessible to all. Such a commitment includes:

This will be accomplished by upholding the principles of equality in all aspects of our work. We will audit and monitor our business activities regularly and take appropriate steps if it appears that our commitment to equality is not being delivered effectively.

Kick It Out is English football’s equality and inclusion organisation. Working throughout the football, educational and community sectors to challenge discrimination, encourage inclusive practices and campaign for positive change, Kick It Out is at the heart of the fight against discrimination for everyone who plays, watches or works in football.

Show Racism the Red Card (SRtRC) is the UK’s leading anti-racism educational charity. It was established in January 1996, thanks in part to a donation by then Newcastle United goalkeeper Shaka Hislop. To this day SRtRC continues to utilise the high-profile status of football and football players to help tackle racism in society and has also expanded into other sports. The majority of the campaign’s work involves the delivery of educational workshops to young people and adults in schools, workplaces and at events held in football stadiums. Across the UK, SRtRC provides educational sessions to more than 50,000 individuals per year.

The GFSN works to maintain a social network for LGB+T supporters, to encourage inclusive teams for players of all abilities, and to campaign against discrimination in football, with a view to creating a safe and tolerant environment both on and off the pitch.

The EHRC is an independent statutory body established to eliminate discrimination, reduce inequality protect human rights and to build good relations. The EHRC is a partnership of the former Commission for Racial Equality, the Equal Opportunities Commission and the Disability Rights Commission and also takes on responsibility for the other aspects of equality: age, sexual orientation and religion or belief, as well as human rights.

Level Playing Field is a registered charity in England and Wales, and acts as a campaigning and advisory organisation to its membership and other parties across all sports. You will find information on disabled fans facilities at clubs and stadia, along with useful disability and access reports, guides, good practice documents and general disabled supporter information. You'll also find the latest news items and a back catalogue of the Level Playing Field e-newsletters.

Stonewall stand for lesbian, gay, bi, trans, queer, questioning and ace (LGBTQ+) people everywhere. We imagine a world where all LGBTQ+ people are free to be themselves and can live their lives to the full.

Sport Equals exist to promote ethnic diversity across sport and physical activity. Originally set up in 1998 by Sport England, in partnership with the Commission for Racial Equality, they are now a fully independent body and a national partner of Sport England.

Founded in May 2021, HerGameToo is a voluntary organisation ran by female football fans; who are committed to growing the campaign with the aim of fostering an ethos in football in which women are welcomed and respected equally. Alongside working full-time in their day jobs, the team dedicate their hours around this to support the progression of HerGameToo.

Established in 2005 Birmingham Blaze FC is an LGBT+ team competing in local Birmingham leagues as well as nationally and internationally in tournaments.

All supporters of Birmingham City are encouraged to report any incident that they deem to be abusive, hateful, threatening, offensive or discriminatory on social media that relates to the Club, fanbase or is representative of the fanbase.

Incidents of the aforementioned nature that should be reported include, but are not limited to:

Any posts that are considered to fall into the above categories must be screenshotted to include the account name and the post in question and passed on to fans@bcfc.com.

Following this, the Club will hide the comments from the site and liaise with the correct division of West Midlands Police (hate crimes, serious crimes for example) to agree the most suitable course of action.

All reports will remain confidential between the Club and the police.

Birmingham City Football Club strives to create a matchday experience that is safe, inclusive, and accessible to all supporters. The Club has a zero-tolerance policy with any supporter that it deems to be in breach of expected behavioural standards. The Club works with multiple external partners to educate staff and agree upon what is considered to be unacceptable actions, gestures or words within the stadium.

The below process details how incidents are brought to the Club’s attention, how they are dealt with, and how outcomes affect the individual(s) involved:

Identifying an incident: Away Matches

Following the identification of an incident, the Club will work with the supporter/steward/third party to gather facts surrounding the report and liaise with the police. The report will be highlighted to the appropriate police department (hate crimes, narcotics, serious crime for example) and the Club will support the investigation in accordance with the requirements of the police.

Whilst an investigation is ongoing, the Club has the right to place an interim ban on any individual(s) involved.

Should the individual be found guilty of the offence, the Club will adhere to the punishment set by the courts. The Club will also work with the police across the length of the sentence to highlight anything that could be considered a breach of sentencing terms.

Should a not guilty verdict be passed, the Club retains the right to issue internal sanctions based on the evidence and facts available to the Club. Throughout the internal investigation process, the Club will liaise with the Football Supporters Association (FSA). However, the final decision on any internal punishments is the responsibility of the Club’s Safety Officer.

Punishments handed out by the Club may include, but are not limited to, written warnings, matchday bans, season-long bans, bans to last a given number of years, and indefinite bans.

The Club will notify individuals of any internal reprimands that have been applied in writing.

All supporters issued with a civil stadium ban by the Club have the right to appeal the decision made by the Club. The appeal panel will consist of three members of the Senior Management Team, independent to the Safety Officer who issued the sanction.

Supporters will have seven days from receiving their sanction to notify the Club of their intent to appeal. The appeals panel has to right to both reduce and extend sanctions should they wish.

The Club will communicate with any individual who has appealed what the outcome is within seven days of the appeal.

Should the Club issue a civil stadium ban to a supporter and that individual is found to be in breach of the sanction, the ban will be extended at the discretion of the Club.

Any individual found to be in breach of a Football Banning Order will be passed on to West Midlands Police.

Returning from a ban

Throughout the duration of a ban from the Club (whether that is a Football Banning Order or a civil stadium ban), the Club will encourage individuals to engage with one of the Club’s third-party educational services and will work with the FSA to ensure that suitable steps have been taken to educate individuals sufficiently.

Upon completion of a ban, the individual will be asked to enter into a behavioural contract with the Club. This allows the Club to monitor the impact of the education provided to the individual and will support a smooth transition back into the stadium following the ban. The behavioural contract will apply for a limited period of time and will be lifted by the Safety Officer once they are satisfied there will be no further behaviour of concern.

The below matrix serves as a guide for how the Club will treat behavioural, discriminatory and ticketing offences. We accept that no two incidents are the same, and our Safety Team and Supporter Disciplinary Committee will consider all available evidence (often shared with the Club by the police) when dealing with incidents and determining the sanction. The Club reserves the right to suspend a supporter’s account whilst an investigation takes place. Supporters are also advised that:

Offences will be reported to the police or other enforcing authorities where appropriate. The Club sanctions differ from those of the police and will be in addition to any other sanctions imposed by the police/enforcing authority. The Club will deal with each case on an individual basis and reserves the right to use its discretion within the recommended sanction criteria provided.

The Club retains the right to depart from the sanction guidelines detailed above if it is required and deemed fit.

Any supporter who receives a sanction of any kind is entitled to an appeal meeting, for which no individual from the initial Supporter Disciplinary Committee will be present. 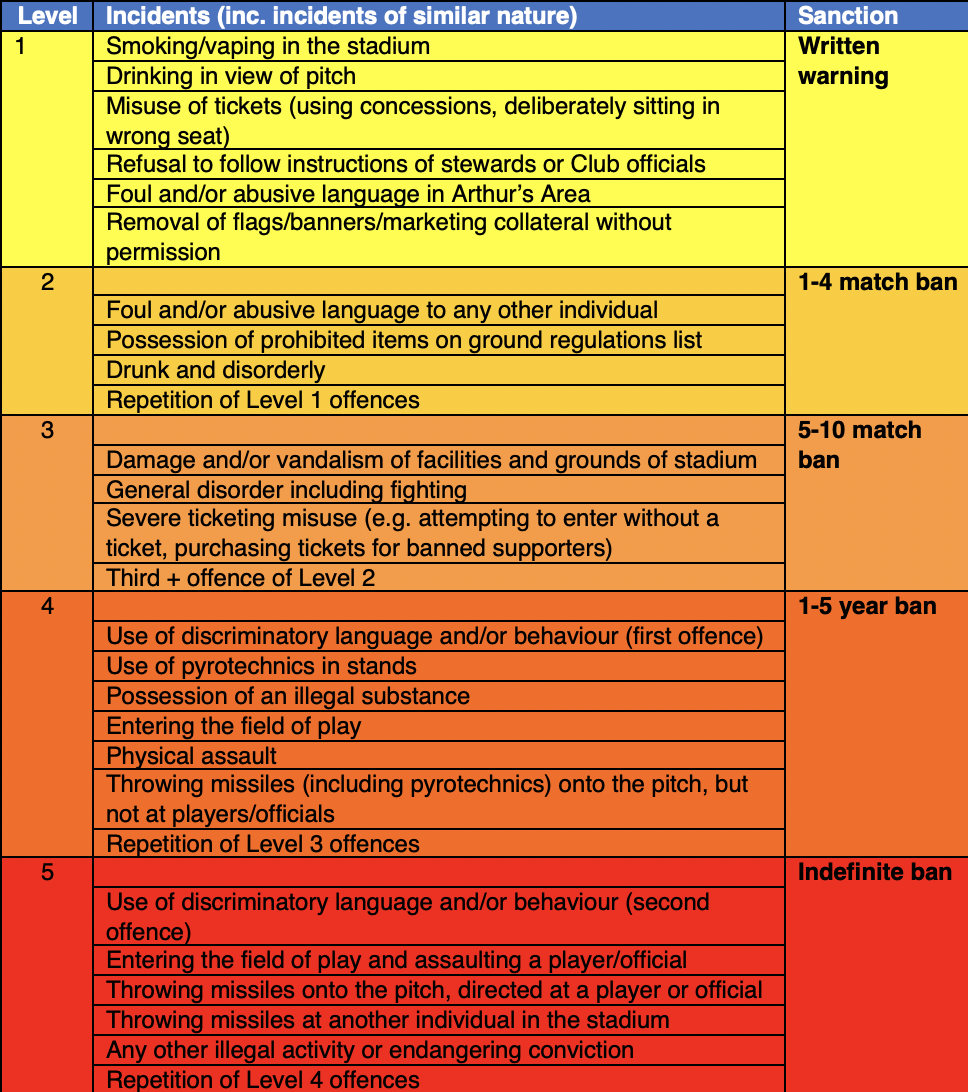